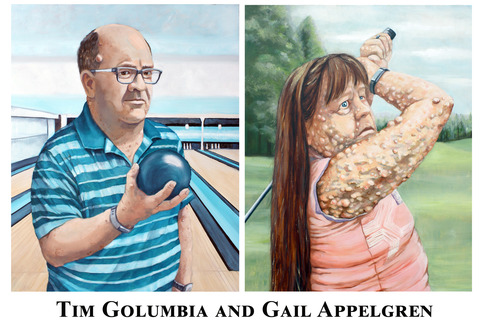 Tim did not meet any other peers who had NF until around his 40th birthday. He attended a symposium in Vancouver and it was an eye awakening experience. Afterwards, Tim was contacted by the executive director of the British Columbia Neurofibromatosis Foundation about becoming a board member. Shortly after that Tim became president. He was awarded the BCNF Paul Ralfs Volunteer of the Year award for 2012 by the board of directors. Tim resigned from the BCNF board in 2015 and switched to vice president of the Alberta Tumour Foundation in 2016.

Tim enjoys golfing, 5-pin bowling and spending time with his wife, Gail who also has NF. Tim continues to work as a social worker in Children’s services and plans to retire in early 2021.

"Gail Golfing the Course"
Gail has had close to 40 surgeries over the years, removing bumps/tumors that are creating pain or difficulty for her. However, this has not slowed her down, as she has played many different sports over her life span, and continues to this day. She has 2 university degrees and has spent over 31 years working as a social worker.

She got married when she was 53 years to a man who also has NF. Gail says, “when I look in the mirror, I don’t see NF, I only see my big bright smile and my mischievous eyes looking back at me.” Gail is on the Alberta Tumour Foundation Board which supports and assists individuals and their families, as well as to educate others.
NF ~ Marriage
Loading...