RACHEL MINDRUP
RACHEL MINDRUP
Many Faces of Neurofibromatosis (NF) > NF2 ~ Portraits > Oil Portraits NF2 (United States)
These documentary styled paintings are all done with the assistance of those portrayed coordinating their own photo shoots and celebrating their vocations or hobbies. Together we work on how the portrait should be handled. Each participant writes his or her own biography and ends it with a positive note for all of us to ponder and live by!  Please view the entire collection at: http://www.facebook.com/ManyFacesNF 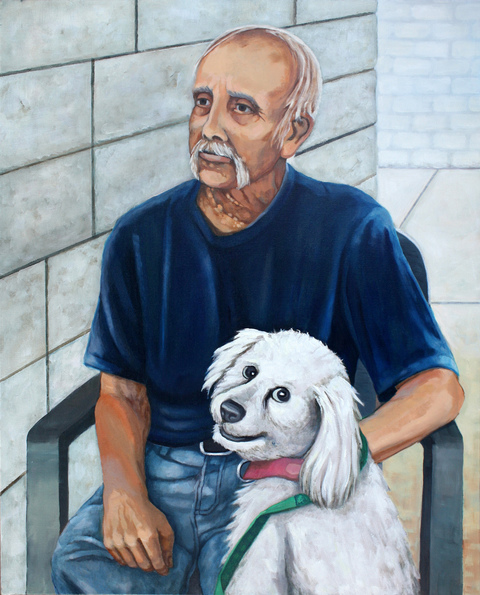 Mark’s NF diagnosis came about through an unusual way. He had twisted an ankle and stopped in at his doctor’s office to see if he could get in. He’d known for years something was going on with his body but his doctor couldn’t diagnose it. A man with a severe case of NF was in the waiting room and his doctor immediately made the connection. He came to Mark and said, “I know what you have.” Mark was dubious thinking “Yeah, a bent foot.” That was the day he learned about NF2.

NF2 didn’t bother Mark much. He was able to be real active in Search and Rescue for twenty years but did have to give that up as things with his NF progressed. Mark is one of the lucky few with NF2 who are fairly mildly affected. NF has taken far too many of his friends. Mark’s connection with NF goes well past his own diagnosis. Mark met Marcy and Jay years ago. This mother and son also had NF and the three of them became friends. Two days before a visit Marcy called and informed him that Jay was in the emergency room with a suspected stroke. Mark immediately got his flight changed and came down the next day. When he got there they were transferring Jay to another hospital where he was diagnosed with the GBM tumor. Mark’s three day visit turned into a three week and then he just moved there. Just short of a year after diagnosis the family lost Jay. One of the last things Jay made Mark promise was that he’d stay and watch over his mom. Mark feels like they are family. From the time he met Jay, Mark would have been proud to call Jay his son.
Oil Portraits NF2 (United States)
Loading...