RACHEL MINDRUP
RACHEL MINDRUP
Neurofibromatosis (NF) Artwork > Many Faces of NF1 ~ Portraits > Oil Portraits NF1 (United States)
These documentary styled paintings are all done with the assistance of those portrayed coordinating their own photo shoots and celebrating their vocations or hobbies. Together we work on how the portrait should be handled. Each participant writes his or her own biography and ends it with a positive note for all of us to ponder and live by!  Please view the entire collection at: http://www.facebook.com/ManyFacesNF 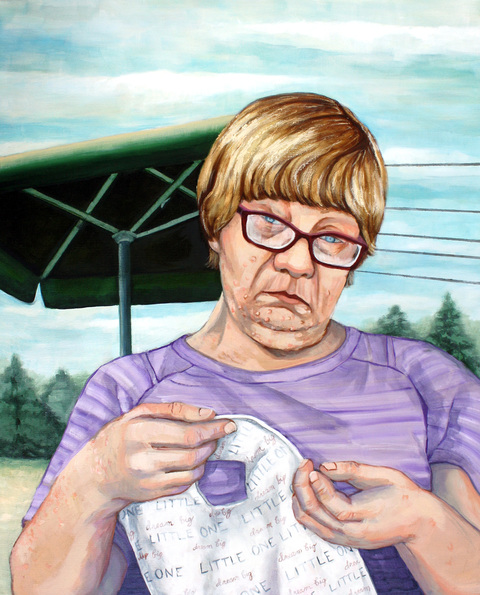 When Laurie was born in 1973, the doctors noticed cafe au lait spots, one of which was wrapped around her torso. They also noticed small tumors on her left buttock, and one on her right leg. After a few months the doctors told her parents the news. Laurie had NF type 1. The doctors knew very little and assumed her life was going to be short and painful. As she grew the signs of NF1 became more apparent, Laurie spent many nights sleeping with her parents begging for them to stop the pain. As she grew her parents noticed that her legs were different lengths. She had to have a lift built on the bottom of her right shoe.

When Laurie was eight she went to John Hopkins Hospital where she had the first of many surgeries including the debulking of a plexiform tumor. Laurie would continue to have many surgeries to debulk and remove tumors. Those tumors are and have returned, getting them out completely is never going to happen. As a school girl, learning was a challenge. She struggled to make friends and would be bullied daily. She was constantly reminded of how stupid she was and when she couldn’t pass a test it was a reminder. In PE, classmates would never want her on their team and would end up throwing/kicking balls that would purposely hit her where the plexiform tumors were. Teachers never really seemed to care.

Laurie graduated high school and went on to earn two associate degrees, through a local community college. As an adult Laurie has had to continue to have surgeries, some have been pretty challenging to recover from. Because the risk that the plexiform tumors may become cancerous, routine MRIs are normal and daily life is filled with chronic pain.

Laurie has spent 28 years in the classroom from helping with childcare to being a kindergarten assistant. Her job has been her happy place. The kids have given her a purpose, a reason to actually want to get out of bed, and to keep up the fight.
Oil Portraits NF1 (United States)
Loading...