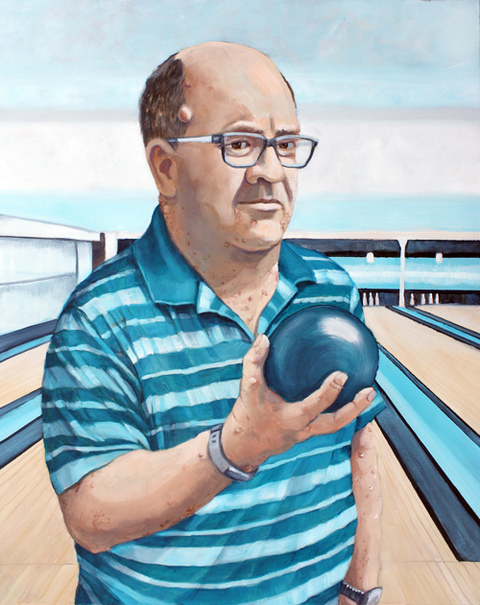 Tim Golumbia was diagnosed with NF1 at about the age of 12. His was a spontaneous gene mutation. He started puberty at the age of 7 and had an early growth spurt resulting in his being taller and hairier than his peers. This resulted in significant teasing and bullying. The ill treatment from his peers intensified due the added burden of a speech impediment and a learning disability. Tim’s coordination and balance were very poor so he did not perform well in sport-related activities in gym class. Tim was shy about changing for gym or going without a shirt because he was teased about his appearance. School was difficult academically and socially because of his social awkwardness, lisp in his speech and clumsiness.

Tim has had 6 or 7 procedures to remove tumors on his skin. Tim has a growth in a finger on his right hand that has been trimmed twice. Since that time, it has grown back again but he has decided that since it is not in the way or causing problems, he will leave it be. Tim is not bothered by the presence of his tumors and does not feel it is necessary to remove them unless they are causing pain or other problems. He wears them with pride and welcomes questions and queries from strangers about what they are.

Tim did not meet any other peers who had NF until around his 40th birthday. He attended a symposium in Vancouver and it was an eye awakening experience. Afterwards, Tim was contacted by the executive director of the British Columbia Neurofibromatosis Foundation (now known as the Tumour Foundation of British Columbia) about becoming a board member. They had felt Tim’s positive energy and thought he would be a great addition. Within months Tim was on the board and acting as treasurer. Shortly after that Tim stepped became president. He was awarded the BCNF Paul Ralfs Volunteer of the Year award for 2012 by the board of directors. Tim resigned from the BCNF board in 2015 and switched to vice president of the Alberta Tumour Foundation in 2016.

Tim enjoys golfing, 5-pin bowling and spending time with his wife, Gail who also has NF. Tim continues to work as a social worker in Children’s services and plans to retire in early 2021.
Oil Portraits NF1 (Worldwide)
Loading...